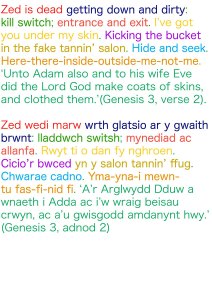 In 2012 the Rhôd Artists Group developed a collaborative work and research project at The Tannery, Machynlleth from Monday 13th February to Sunday 11th March.
Mike Murray, Dave Shepherd, Jason Pinder, Penny Jones, Jacob Whittaker, Mari Beynon Owen, Samuel William Aldridge, Elizabeth Waterhouse, Kathryn Campbell Dodd and Roger Lougher.
The title of the exhibition was an ‘exquisite corpse’; the sum of each artist’s own title for the show they would ideally have liked to curate within The Tannery if curation was not shared with 9 other people.
The process was mostly undertaken behind the closed doors of the gallery where it offered the artists an opportunity to work in a site-specific way, interact with each others work and allow the project to change and develop in situ.
The groups’ postings here as the show progresses and the artists curate the show and discuss their particular interpretations of the processes.

The exhibition opened with a closing event on the Friday 9th March when members of the public were invited to the gallery to see the current position of the work. This was followed by a walk and talk around the show on Saturday 10th March in the morning and in the afternoon a discussion with the artists using video projections.
There was a skype event on February 29th when the group discussed the show with each other and any who wished to join them.

Read the blog from the Tannery here