Jason Pinder's sculptural interventions and process-driven installations are concerned, primarily, with the physical act of doing and of making. Visually blunt and straightforward, Pinder works are clothed in an appearance of ‘it-is-what-it-is-ness’. Often requiring substantial amounts of base physical exertion, from sanding to stacking, the poetry in these pieces arises from the essential pointlessness of the labour that goes into them. Since graduating in Fine Art from Cardiff School of Art & Design in 2008, Pinder has exhibited across England and Wales. He is a founding member of the British Racing Green collective, a UK-wide organization comprising artists, writers, photgraphers and designers, dedicated to facilitating collaborative projects and events.

I think that in trying so hard to work as a group, we have neglected any responsibilty we may have to the public who will view the outcome of this project. This is no bad thing.But are we, in trying to salvage componenets that are ‘suitable’ for viewing, just trying to ram a square peg into a round hole?

It’s hard to get excited without being on site. I’m looking forward to getting there on Sunday.

I could sense mixed feelings last week.
Lots of wandering around, looking over shoulders and putting a brave face on. What are we doing?
It seems that there is a very fine line between what could be great and what could be awful. I’ve a feeling we wont know which side we’ve fallen until after we’ve finished.

People are playing, alone to begin with. It’s like watching toddlers who’ve never played together before.

We all kicked Mari’s bucket. It broke. 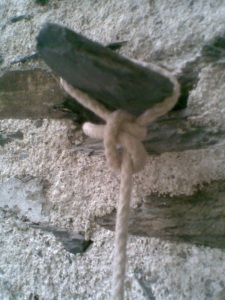 Rhodio at the Tannery. Husk of a building that was once a Tannery, soon to be converted into an art gallery.

Our project with the building is at a time where it is neither a tannery nor a gallery. A series of projects have and will be carried out during this period. I’m not all that aware of what went on in the others and I’m not sure what is planned for the next.

I have a vague idea of what went on in the space when it was a tannery, at least in terms of the processes carried out. There are no doubt a lot of buildings that used to be tanneries.

There were no doubt a lot of interesting people who worked here and equally interesting relationships between those people. I’m also sure that the building has played numerous significant roles in the town.